“I was drawn to kickboxing for many years but ultimately I chose pro-wrestling as I enjoyed the showmanship of it as well as viewing it as a great way to see and experience much of the world. Having already been to 45 countries so far, I think that I was right about that”.

The Dragon – as he is called – of wrestling has four black belts in Karate and Kung Fu. Joseph  Edward Hitchen is his real name.

He is never scared when he enters the ring. He left his butterflies and nervousness of wrestling in his rookie years.

Chuck Norris is the reason of him getting involved in Martial Arts. “I’m a massive Chuck Norris fan. He and Bruce Lee were the main reasons I got into this”.

Canadian wrestler Joe Legend will be part of the cast in Bruno Pischiutta’s upcoming feature film “The Bad Joke’’.

You’ve seen him act in the TV series “Heat” but mostly in the ring where he puts his muscles towards a theatrical performance.

In comparison to boxing, which is a legitimate athletic contest, “pro-wrestling is a pre-determined sports entertainment”, says Joe.  Matches are held between two or more sides (corners). Each corner may consist of one wrestler or a team of two.

His true pro-wrestling fans will always remember Joe from the successful tag team “Sex and Violence”.

The hundreds of ladies who appreciate a well build body should know that the ‘Ace’ has a wife whom he met in Hannover, Germany where he now lives together with her and with his twin sons, Maverick and Connor. He is absolutely in love with them and says that “They are my best friends in the world”. The seven year old twins also help their daddy stay in shape. “They keep me pretty active”.

Joe Legend got even closer to the cameras in 2005 when we watched him on the Saturday evening reality show  “Celebrity Wrestling”, teaching stars how to wrestler.

Joe wants to be an actor! He states that he really enjoys performing and developing characters due to his wrestling background. Being just a “wrestler” isn’t really a money-draw. “The real characters are the ones who draw in the fans so I have been helpful to many in getting actual character traits connected to characters and, lending that to film, it is something that I think will come naturally to me. I’ve performed in some films in the UK and in France as well as back in Canada so I got bit by the bug then. I’m also an author therefore developing characters is kind of pivotal as well”.

His favorite actors are Russell Crowe and Tom Hanks. Both of them are Oscar winners. It makes me think that, maybe Joe wants to be a Legend and a pro in Hollywood too! “I think that Hollywood is a target for any actor. Most of all, I want to do good work that I can be proud of and, most importantly, make my kids proud of me for. I want to make a comfortable living and to inspire my kids to pursue their dreams and live their lives. This is what will satisfy me. I hold true to my own (usually high) standards. I firmly believe there is nothing I can’t do. I just need to apply myself and focus. I might not have it right at first but I’ll come back at it with patience and perseverance. I don’t seek approval anywhere else”, concludes Joe.

He admits that he has considered retiring from the world of wrestling, “I’m now 45 so the bumps and bruises tend to hurt a bit longer now than when I was in my 20’s. I want to make sure I’m ingrained in my film career before I move away from wrestling so that I can comfortably bring my fan base with me for the ride. I don’t want to abandon those whom have bought tickets to see me, bought my t-shirts and such in a cold-turkey way but would rather (hopefully) invite them along on this next journey in my life.”

Till the producer shouts “take one” Joe is crafting his most dearly hobby of being a daddy or spending time watching stand-up comedy and playing with his rabbits (Findus and Izzy).

We shall soon see him on the big screen!

Journalist Carola Bidlo’s interview with Joe Legend published in the 2015 issue of Daria! magazine (original pages from the magazine) – page #83: 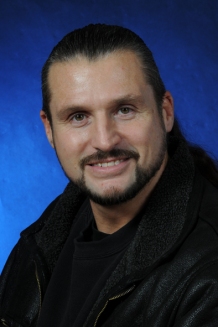